Elisa Zeni was born in Spormaggiore (TN) on February 29, 1980. In 1999 she graduated in the Institute of Arts "A. Vittoria" in Trento (Experimental Course: Painting and Visual Arts - Course Ordering: Education of Applied Arts).

During these studies, through training activities, she approaches the world of restoration, working with restorer Gianmario Finadri dealing with conservative intervention on frescoes, wooden sculptures, paintings on canvas. Collaboration that continues even after their studies, and after one-year break between 1999 and 2000, spent to attend the Course of Restoration Works of Art at UIA-International University of Art, La Giudecca (Venice).
About this period we can report, among many others, the restoration of the church Roverè della Luna , Predazzo, and frescoes attributed to the Baschenis painters in the church of Cusiano in Val di Sole, in the "House of the frescoes" in Ossana, and in the church Maiano in Val di Non

In 2001, while maintaining contacts with the restoration, she decides to resume her studies by completing three years later, in March 2005, the graduate program in Cultural Heritage at the University of Trento, presenting the thesis' The "House of Frescoes "in Val di Sole, at Ossana: pictorial cycle, conservation and proposal for renovation works” in collaboration with the restorer Gianmario Finadri and supported by the rapporteur Roberto Perini.

After completing her studies in May 2005, she became a freelance, maintaining anyway a cooperation with the firm “Finadri”, as well as the company “Ares” and the association with “Opus Bahia”, which organizes a course on preservation and maintenance of furniture and frescoes in “Castel Taufers” (BZ)

Was the 2006 when she start painting oils on canvas, creating on canvas and wood mountain landscapes, as expression of her land (Trentino-Dolomiti) that has been always fascinating her. She focused the research in particular on the effects that light can create, filtering through the branches of trees and reflecting itself in water. These were works of great impact for the viewer, which do convey him or her the same feeling the artist had in meeting that subject, and they are the result of the desire of transmitting and communicating what nature, through its forms and colors can still give us, if heard and pondered.

In the summer of 2006 she started the experience of "The Giralune" art group, while in 2007 she attended advanced courses in watercolor techniques and trompe-l'oeil in Milan.

Since 2007 she performed in numerous solo and group exhibitions.

She begins to experience a more personal way of nature interpretation, through the thematic cycle of "Hedgehopping fligths" presented at SOSAT Hall of Trento, followed by the cycle of "Paths of the Water" with a central focus on water and its contact with the ground it crosses.

In September 2007, during the sporting event of "La Rampa" into the forest of Fai (TN) creates a work in lime, mixed with earth and leaves, which embodies the legend of "Paganella".

In 2008 she approached the world of Byzantine Icons at the Laboratory of Byzantine Icons “Santi Martiri” of Trento and perfected her technique of portraiture, in collaboration with the studio Immart Mezzocorona. Meanwhile, the water theme kept on emerging strong and deep in her paintings, through the development of the theme "Ice paths", to unite in a single inner artistic and symbolic path, driven by water, the major addressed studies: "Ice paths", just as the image of her past and remembrance of her life, the melting ice leaves comming out on the surface memories stored inside herself; "Paths of the Water", which reflects in the water that flows, the flow of her life, the moments leading to and flowing through or come across the many nuances of everyday situations, seen as stones which the water enters into a relationship with; "Hedgehopping fligths" , where the water vapor rising up to the tops of the highest peaks, is carrying with itself dreams and desires for the future.

In 2009 she was invited for making the sundial #34 in Monclassico. In late 2009 she joined the association of artists from Trentino "La Cerchia", an important artistic associacion of Trentino founded in 1986, becoming the youngest member. 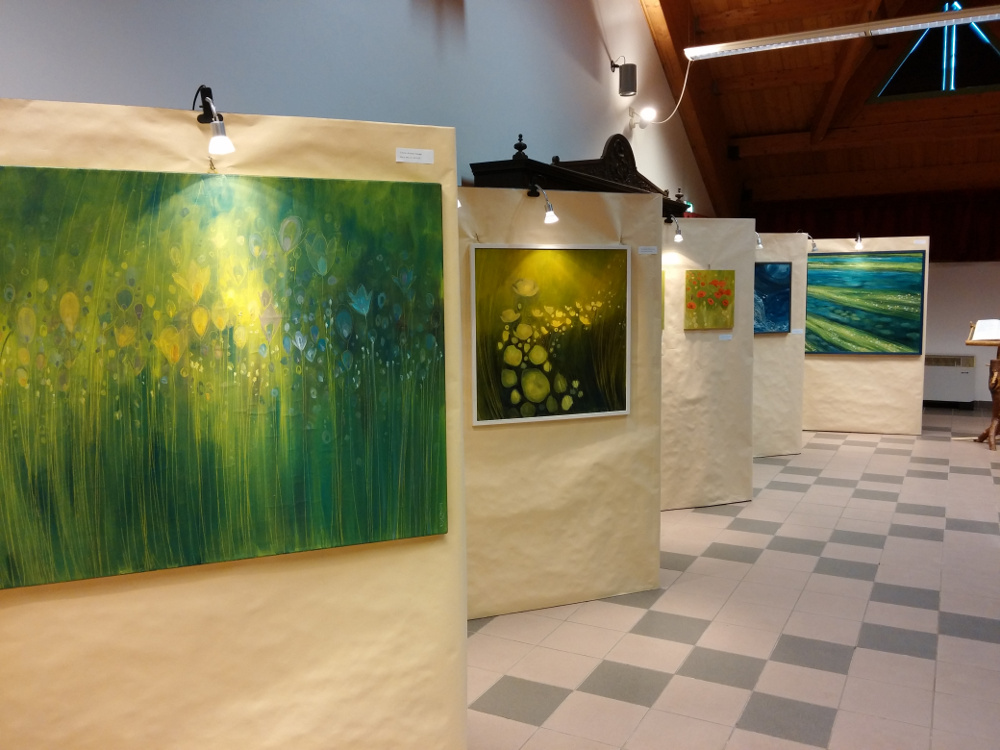 2010 starts with a series of educational painting workshops in nursery and primary schools.

In the 2013, after several exhibitions in Italy and other Countries, the inspiration is strongly influenced by the birth of her two sons: the colors are strengthened further and even the stones of the depth of its water, symbolically, begin to "blossom". Thus was born the new line "Of Soil and Water."